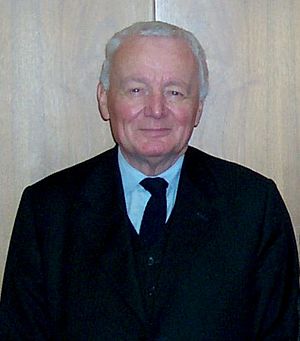 Arnulf Baring (8 May 1932 – 2 March 2019) was a German lawyer, journalist, political scientist, contemporary historian and author. He was a member of the German-British Baring family of bankers. He was born in Dresden.

Baring worked at the Bundespräsidialamt (Office of the German President) from 1976 to 1979. He received the Commander Cross of the Order of Merit of the Federal Republic of Germany (Großes Bundesverdienstkreuz des Verdienstordens der Bundesrepublik Deutschland) in 1998.

All content from Kiddle encyclopedia articles (including the article images and facts) can be freely used under Attribution-ShareAlike license, unless stated otherwise. Cite this article:
Arnulf Baring Facts for Kids. Kiddle Encyclopedia.