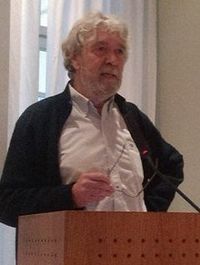 Arnulf Kolstad (23 April 1942 – 21 May 2020) was a Norwegian social psychologist. He was born in Oslo. He was a professor emeritus of Social Psychology at the Norwegian University of Science and Technology (NTNU).

He was appointed by the King-in-Council at the then-University of Trondheim in 1986 and was head of department for the Department of Psychology from 1990 to 1992. He became professor emeritus in 2012.

He was critical of the 2010 Nobel Peace Prize going to Liu Xiaobo as "western arrogance".

All content from Kiddle encyclopedia articles (including the article images and facts) can be freely used under Attribution-ShareAlike license, unless stated otherwise. Cite this article:
Arnulf Kolstad Facts for Kids. Kiddle Encyclopedia.