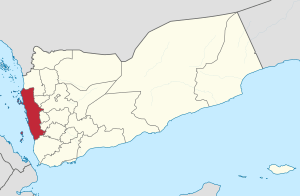 Ashwaq Moharram (Arabic: أشواق محرّم ) is a doctor from Yemen. BBC named her on their list of 100 most inspirational and influential Women for 2016.

After the war started, Ashwaq's husband became sick. He had a heart infection. He needed medicine, but there was no medicine in the hospital. He went to Jordan with their two children.

In 2000 Ashwaq went to work at the General Hospital in Hodeidah. In 2001 she became the head of the department of obstetrics and gynecology. In 2007 she became a lecturer at the Faculty of Health Sciences at Hodeidah University. She is now the Deputy Director General of the Public Health and Population Office of the Directorate of Hodeidah.

All content from Kiddle encyclopedia articles (including the article images and facts) can be freely used under Attribution-ShareAlike license, unless stated otherwise. Cite this article:
Ashwaq Moharram Facts for Kids. Kiddle Encyclopedia.