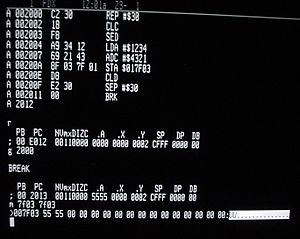 Most computers come with a specified set of very basic instructions that correspond to the basic machine operations that the computer can perform. For example, a "Load" instruction causes the processor to move a string of bits from a location in the processor's memory to a special holding place called a register.

The programmer can write a program using a sequence of these assembler instructions.

In the earliest computers, programmers actually wrote programs in machine code, but assembler languages or instruction sets were soon developed to speed up programming. Today, assembler programming is used only where very efficient control over processor operations is needed.

All content from Kiddle encyclopedia articles (including the article images and facts) can be freely used under Attribution-ShareAlike license, unless stated otherwise. Cite this article:
Assembler Facts for Kids. Kiddle Encyclopedia.