Association of Anaesthetists of Great Britain and Ireland facts for kids

The AAGBI adopted the motto in somno securitas (safe in sleep) when it was granted the right to bear arms by King George VI in 1945. Patients and anaesthetists alike can be secure in the knowledge that the Association continues to protect their mutual interests. The AAGBI office is located in the centre of London. 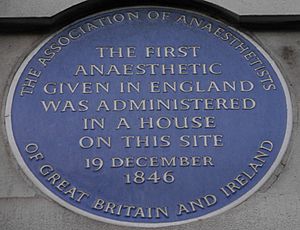 Honorary Membership was instituted in 1932 at the time that the Association was founded. The award is accompanied by a citation and a certificate. The award is usually made at or about the time of retirement from clinical practice.

The Sir Ivan Magill Gold Medal "for innovation" was instituted in 1988 to commemorate the centenary of the birth of the pioneer anaesthetist Sir Ivan Magill. It is awarded for uniquely outstanding innovative contributions to the specialty of anaesthesia.

The John Snow Silver Medal was instituted in 1946. The first three awards were to anaesthetists who had distinguished themselves and received awards for gallantry in World War II (2 OBEs and an MC). One of these was also the Founder President and a second a distinguished academic anaesthetist.

The Pask Award was instituted in 1977 after the Moorgate Underground disaster. The award was instituted to enable Council to honour those who have rendered distinguished service, either with conspicuous bravery in the face of danger in the performance of their clinical duties, in a single meritorious act or consistently and faithfully over a long period.

The Evelyn Baker medal was instituted in 1998 for outstanding clinical competence, recognising the ‘unsung heroes’ of clinical anaesthesia and related practice. The defining characteristics of clinical competence are deemed to be technical proficiency, consistently reliable clinical judgement and wisdom, and skill in communicating with patients, their relatives and colleagues. The ability to train and enthuse junior colleagues is seen as an integral part of communication skill, extending beyond formal teaching or academic presentation.

The Featherstone Award was instituted in 2001 in memory of Dr Henry Featherstone, founder of the Association and is made to practicing anaesthetists in acknowledgement of their substantial contribution to the practice of anaesthesia.

The award was instituted to enable Council to honour those who have rendered significant services to the heritage of anaesthesia in general or to the museum and archives of the Association in particular.

The Editors' Award was instituted in 2008 to enable the Council of the Association to honour those who have rendered significant editorial services to the Association and its publications.

This medal was instituted in 2007 to enable the Council of the Association to honour those who have served on Council as Vice President.

The award was instituted to enable Council to honour those members of the medical trade who have made significant contributions to anaesthesia or to the Association.

WSM is the Association's largest annual events. Held in London each year, WSM is the leading anaesthetic meeting in the UK with an attendance of around 800 national and international delegates. The scientific programme is led by high-profile speakers and focuses on current issues in anaesthesia. There is an extensive trade exhibition with around 40 leading companies in anaesthetics attending. WSM is aimed at all levels of anaesthetists from trainees to consultants and is a European CPD accredited meeting.

The annual Trainee Conference is the leading trainee scientific meeting in the UK aimed at all levels of trainee anaesthetists from CT1 to ST7. It has an attendance of around 400 delegates each year and gives trainees a great opportunity to network with their colleagues, present their work as an oral presentation or poster and attend hands-on workshops.

AAGBI offers educational seminars featuring leading experts in the fields of anaesthesia, critical care and pain medicine who present the latest information on a variety of key anaesthesia topics. Seminars are designed to focus on a specific field of interest within anaesthesia and help to build on specialist interests.

Core Topics are one- or two-day conferences organised by the Association at different locations around UK and Ireland allowing delegates the chance to update their knowledge in a cost-effective and convenient way.

Learn@ is an area of the website where members can find educational, learning and CPD resources. They can learn in their own time and keep a record of there completed CPD for use in appraisals and revalidation.

The Anaesthesia Heritage Centre contains the Association's archives, the Anaesthesia Museum and a rare book collection and is open to everyone.

The centre consists of a museum with a collection of over 4,500 objects dating back to 1774, the Association's own archives, which date back to 1932, and a reference library. The museum is a member of The London Museums of Health & Medicine.

The Wylie Medal is awarded to the most meritorious essay on the topic related to anaesthesia, the topic for the essay question changes year on year. The award is open to undergraduate medical student at a university in Great Britain or Ireland. Prizes of £500, £250 and £150 are awarded to the best three submissions. The overall winners are given the Wylie Medal in memory of Dr W Derek Wylie, President of the Association 1980–82.

The main aims of the Association's Innovation project are to promote innovation in anaesthesia and intensive care, to help individuals in their 'journey' from the concept to the finished product, to facilitate introduction to the medical equipment manufacturers or relevant organisation, to facilitate testing of new equipment or idea and to facilitate marketing of a new product or an idea. It involves holding workshops/clinics and seminars on the subject, having regular features in Anaesthesia News and the best innovations featured in Anaesthesia and having plenary or satellite sessions during Annual Congress and WSM London.

Staff grade, associate specialist and specialty doctors (SAS) are important members of any department, especially in Anaesthesia, and make an enormous contribution to service work. Doctors enter the SAS grade for many different reasons. Some enter from different training systems as the SAS route provides a means for secure employment; some have child care or family responsibilities and others do not wish to take on the role of consultant with the attendant responsibilities and duties. The Association has grants and prizes designed especially for SAS doctors such as the SAS Audit, Research Prize and the SAS travel grant.

The Association has around 10,000 members, the majority of whom are consultants.

The International Relations Committee (IRC) of the Association considers applications for funding for projects usually, but not exclusively, in lower resourced countries

The Overseas Anaesthesia Fund (OAF) was launched by the Association in 2006 to enable individuals and organisations to donate directly to Association programmes that support training and promote safer anaesthesia in developing countries. OAF is involved with a variety of projects to support anaesthetists in low- and middle-income countries.

All content from Kiddle encyclopedia articles (including the article images and facts) can be freely used under Attribution-ShareAlike license, unless stated otherwise. Cite this article:
Association of Anaesthetists of Great Britain and Ireland Facts for Kids. Kiddle Encyclopedia.