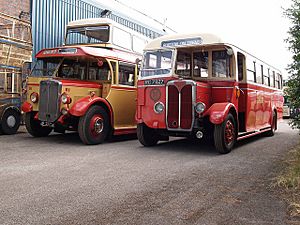 The museum hosted the 40th birthday party of Charles, Prince of Wales on 14 November 1988, when he formally opened the museum.

Following a decision by Birmingham City Council to cease funding the rent on the Witton Tram Depot, it closed in October 2011 and between then and December that year, the collection was moved to the Beecham Business Park, home to the former Jack Allen dustcart assembly plant, in nearby Aldridge,. Subsequently, the museum moved again, this time a short distance within Aldridge, to its present location in Shenstone Drive, Aldridge, where it opened to the public in July 2013. Since reopening, the museum has retained its bus collection but also added an increased number of light commercial vehicles on display.

All content from Kiddle encyclopedia articles (including the article images and facts) can be freely used under Attribution-ShareAlike license, unless stated otherwise. Cite this article:
Aston Manor Road Transport Museum Facts for Kids. Kiddle Encyclopedia.