Attacks by Islamic extremists in Bangladesh facts for kids 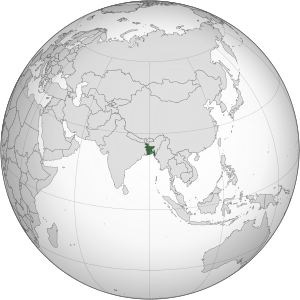 In 2015, Islamic extremists killed four bloggers and a publisher in Bangladesh. A report by the Committee to Protect Journalists said Bangladesh was the fourth most deadly country for journalists.

Nazimuddin Samad, a law student, was hacked and shot to death on a busy street in Dhaka.

Xulhaz Mannan, editor Of Bangladesh’s only LGBT magazine was hacked to death.

Rezaul Karim Siddique, English professor was hacked to death in the city of Rajshahi, Bangladesh, after he organized a music school.

Avijit Roy, a writer who started the blog Mukto-Mona, was hacked to death with machetes in Dhaka after a book fair. His wife, Rafida Bonya Ahmed, was hurt.

Washiqur Rahman Babu was killed with knives at his house in Dhaka. Police said he wrote about religion on Facebook under the name Washiqur Babu.

Ananta Bijoy Das was a blogger with Avaijit Roy's Mukto-Mona. He was hacked to death with machetes in Sylhet.

Niladri Chakrabarti wrote under the name Niloy Neel. He was killed in his apartment.

Faisal Abedin Deepan was killed in his office. He was a publisher who published Roy's books. Another publisher, Ahmed Rahim Tutal, was attacked, but he lived.

Ahmed Rajib Haider was hacked to death near his home in Dhaka in February 2013. He wrote under the name Thaba Baba on his blog Somewhere in Blog.

All content from Kiddle encyclopedia articles (including the article images and facts) can be freely used under Attribution-ShareAlike license, unless stated otherwise. Cite this article:
Attacks by Islamic extremists in Bangladesh Facts for Kids. Kiddle Encyclopedia.