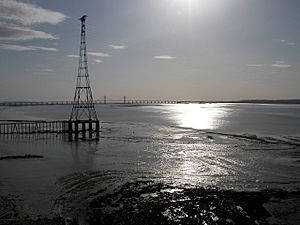 Eastern pylon at Aust, photographed from the Severn Bridge 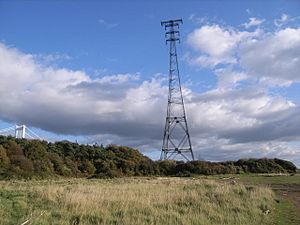 Aust Severn Powerline Crossing is the longest powerline span in the United Kingdom with a span width of 1,618 m (5,308 ft).

The crossing spans the River Severn between Aust and Beachley and is part of the National Grid.

It was commissioned in 1959, and comprises two 275 kV electricity circuits, which form part of the 275 kV Iron Acton to Whitson line.

It is situated south of the Severn Bridge and was built by J. L. Eve Construction, which became Eve Group, and is now Babcock Networks. It is mounted on two pylons, each 148.75 m (488.0 ft) tall. The pylon on the Aust side of the River Severn stands on a caisson accessible via a small bridge. 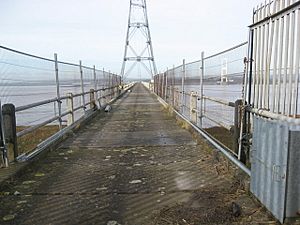 Walkway to the Aust pylon

All content from Kiddle encyclopedia articles (including the article images and facts) can be freely used under Attribution-ShareAlike license, unless stated otherwise. Cite this article:
Aust Severn Powerline Crossing Facts for Kids. Kiddle Encyclopedia.