The Austin History Center is the local history collection of the Austin Public Library and the city's historical archive.

The building opened as the official Austin Public Library in 1933 and served as the main library until 1979, when library functions moved to the John Henry Faulk Library, a newer facility next door. Its site, which overlooks one of four public squares platted in Austin in 1839, was obtained from the Texas Legislature in 1913 for construction of a public library. The Renaissance Revival structure, completed in 1933, was designed by local architect J. Roy White, working for the architectural firm of Austin native Hugo Kuehne, founding dean of the University of Texas School of Architecture. The building also contains work by several Austin craftsmen, including ironworker Fortunat Wiegl, wood-carver Peter Mansbendel, and fresco artist Harold "Bubi" Jessen.

The Austin History Center celebrated its 50th anniversary in 2005. As of 2008 it houses thousands of documents, photographs, maps, artifacts, and personal histories. It features special exhibits and speakers on a regular basis. 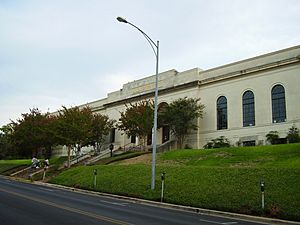 View of the Austin History Center

The historic library building was added to the National Register of Historic Places on May 6, 1993. A Texas Historical Commission marker placed in front of the library identifies it as a Texas Historic Landmark recorded in 1993.

All content from Kiddle encyclopedia articles (including the article images and facts) can be freely used under Attribution-ShareAlike license, unless stated otherwise. Cite this article:
Austin History Center Facts for Kids. Kiddle Encyclopedia.