For the Russian-American Metropolia (1924-1970), see Orthodox Church in America.

The Autonomous Orthodox Metropolia of North and South America and the British Isles is an Old Calendarist jurisdiction which originally comprised the two archdioceses in America and the British deanery of the Holy Synod of Milan. In February 2011 the Milan Synod granted autonomous status to the jurisdiction. It is not in communion with any mainstream Orthodox Church, although it is in communion with some Old Calendarist and True Orthodox groups. The Church has seven Bishops, 36 parishes and missions, and 31 monastic and non-monastic clergy in the United States, Canada, and the United Kingdom.

Before their union with the Milan Synod, the American Archdioceses of the Milan Synod were administratively independent and in communion with no one. Both archdioceses were previously closely tied to separated jurisdictions related to the Ukrainian Orthodox Church.

In 1977, Archbishop Hilarion of Texas was elected under the oversight of Archbishop Joseph (McCormack), who was a spiritual son of Archbishop Palladius (Rudenko), head of the Ukrainian Autocephalic Church in Exile, and had been made a bishop ten years earlier. The Abbey of the Holy Name, the spiritual center of the Archdiocese of New York, has been the continuation of a monastic compound extending back over 100 years. The current Metropolitan, John (LoBue) was originally the spiritual son of Metropolitan William H. F. Brothers (died 1979) who, originally an Old Catholic cleric, had been ordained as a Western rite bishop at St. Nicholas' Cathedral, New York, in 1933, and who had extensive ties to Metropolitan Anastassy of ROCOR.

As traditional Orthodox communities formed primarily of Western converts continued to develop in Europe, Archbishop Auxentios of Athens, primate of the True Orthodox Church of Greece, first established a West European diocese in 1978 by elevating Archimandrite Gabriel to the episcopate of Lisbon. Six years later a second bishop, Tiago of Lisbon, was established for western Europe.

In 1984 Archbishop Auxentios blessed the westerners with self-governance. With this blessing, the Western Synod quickly grew beyond Portugal. In 1990, after a period of upheaval in the TOC of Greece during which Metropolitan Gabriel departed for the Orthodox Church of Poland, the Western Synod elevated Bishop Evloghios of Milan to be its second metropolitan, re-establishing an Orthodox episcopate in the see of St. Ambrose for the first time since the Great Schism of 1054. The Archbishop of Milan was chosen as Primate of the Synod of the West (hence the popular title “Milan Synod”) and became known for its stance against ecumenism as well as its frequent use of pre-schism Western services.

Unity With UAOC and Later Split

In 1990, the Western Synod entered into communion with Metropolitan Mystyslav of the Ukrainian Orthodox Church in Exile, which in 1991 became the Orthodox Patriarchate of Kyiv. In 1994, Patriarch Volodymyr (Romaniuk) recognized the autonomy granted by Archbishop Auxentios and confirmed it with his blessing before his death in 1995. Factionalization in the Ukrainian Church forced the bishops of the Synod of Milan to separate from the newly elected Patriarch, former Bishop Filaret Denisenko of the UAOC, and in 1997, the bishops of the Western Synod elevated Metropolitan Evloghios to Metropolitan of Milan and Aquileia, restoring the original rank of the Autonomous Church of Milan.

In 1997, the Archdioceses of Texas and of New York were received into the Milan Synod. To correct any deficiencies or perceived ambiguities in their consecrations, which were performed while they were associated with the various splinters of the Ukrainian Orthodox Church, they were accepted through the rite of Chierothesia. (The clergy of North America, as mentioned above as being an independent jurisdiction, were known as the Synod of Orthodox Bishops of the Western Rite until their reception by the Milan Synod, after which the Synod as an independent entity was dissolved.)

The Milan Synod's American archdioceses operated under the formal headship of Archbishop Hilarion of Texas from 1997 to 2011, with two bishops and a generally stable presence of approximately 25 to 30 parishes during most of this period. 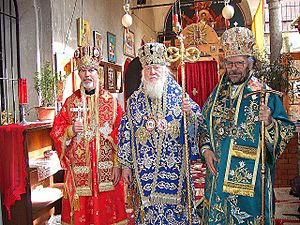 Discussions towards establishing an independent American metropolitanate in communion with the See of Milan began in November 2010. Previously the second ranking archbishop for the United States, Archbishop John of New York, was elevated to the rank of Metropolitan of North and South America for the Autonomous Orthodox Metropolia of North and South America and the British Isles in Milan, Italy.

On 12 July 2011, Metropolitan John of New York and Metropolitan Anghelos of Avlonos entered into full communion with Metropolitan Raphael of the True Orthodox Church in Russia (TOC-R). This event was celebrated as the "Day of Unity" by all three churches until 2014. 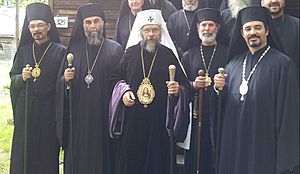 On March 5, 2011, the Chancery of the Holy Synod of Milan made public statements that negotiations were taking place to unite the Synod of Milan to the Patriarchate of Moscow and that they rejected communion with anyone who did not agree with their position. While the public response of the metropolia was a refusal to accept the claim as authoritative statement from Milan, the response among the American clergy was divided. The majority of the clergy, siding with the Metropolitan, opted to strengthen the new Metropolia's bonds with their sister churches throughout the world. A minority, however, began dealing with the patriarchate in secret from the Metropolitan, revealing their change in affiliation after it occurred. Upon early discovery, a provisional statement was released for signature for future incoming clergy rejecting ecumenism and modernism. It is debated between parties for and against such union as to whether the open publication of the document halted the schism in the Metropolia or accelerated it.

Relations With Other Jurisdictions

The Autonomous Orthodox Metropolia of North and South America and the British Isles was created by order of the Holy Synod of Milan on February 27, 2011. A complicating factor to the issuance of said Tomos was the issuance of a Tomos giving jurisdiction over South America to Archbishop Chrysostomos of Ecuador, a Bishop of the True Orthodox Church of Metropolitan Anghelos, five months before with Metropolitan Evloghios' signature on it. This has led to jurisdictional overlap between the two Synods, though in practice such overlap has involved only a few clergy or missions.

On August 24, 2012 (New Style), Metropolitan John recognized the rights of Archbishop Onufrie of Bergamo, a Bishop of the Milan Synod who had separated from the Milan Synod with four parishes in Italy and Spain, as the legitimate head of the Synod in Italy and he was given the rank and title granted to Metropolitan Evloghios of Milan. Due to internal issues within the existing communion, however, formal recognition was never realized. In October 2013, Metropolitan Onufrie issued a Tomos to Metropolitan Nicholas (Iuhos) of Cincinnati (formerly of the ROCOR-V) to self-govern; this recognition was never recognized as valid by the Metropolia and estranged the two Synods.

In March 2014, due to negotiations with a splinter group of the Russian Orthodox Autonomous Church, Metropolitan Raphael of Moscow issued letters defending the condemned heresy of Imyaslavie, to which the Bishops of the Metropolia, in the person of Metropolitan John, issued a series of denunciations, with a final determination to be held at the Synod meeting in 2014. The Synod of Metropolitan Anghelos refused to condemn Imyaslavie as a heresy, referring to it only as a "theologumenon". 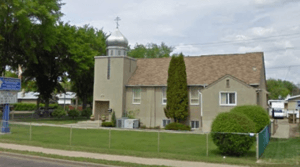 With the reception of Bishop Joseph (Royer) of Edmonton by the Synod, a number of parishes which had become disaffected with the Ukrainian Orthodox Consistory's pastoral care applied to join and were accepted into the Archdiocese in 2013, leading the consistory to threaten legal action against the parishes (but not direct engagement against the Bishop) to take their buildings away. While some parishes were able to appeal to their right to the parish buildings in civil court, others have been threatened with legal action by the consistory, and are forming missions independently of their historic temples.

The Synod named the bishop to the rank of Archbishop of Edmonton and Canada in 2014, with an enthronment scheduled during the biennial meeting of the Synod of Bishops in 2014.

All content from Kiddle encyclopedia articles (including the article images and facts) can be freely used under Attribution-ShareAlike license, unless stated otherwise. Cite this article:
Autonomous Orthodox Metropolia of North and South America and the British Isles Facts for Kids. Kiddle Encyclopedia.