An allele is a form of a gene at a particular position (locus) on a chromosome. It is the bit of coding DNA at that place.

In a heterozygote the effect of one allele may completely ‘mask’ the other. That is, the phenotype produced by the two alleles in heterozygous combination is identical to that produced by one of the two homozygous genotypes.

The allele that masks the other is said to be dominant to the latter, and the alternative allele is said to be recessive to the former. This idea originates in the work of Gregor Mendel, the founder of genetics.

In other cases, both alleles contribute to the phenotype.

The inheritance of alleles, and their dominance, can be represented in a Punnett square.

An example is the gene for blossom colour in many species of flower. A single gene controls the colour of the petals, but there may be several different versions (or alleles) of the gene.

In this example, parents have the genotype Bb (capital letters show dominant alleles and lower-case letters to show recessive alleles). If B (capital) is found in their genotype, the flower will be red. Therefore, the only time a flower is not red is when the genotype is bb (there are no capital 'B's). 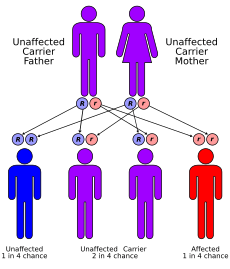 The pattern of inheritance of recessive genes is quite simple. If they are heterozygote with a dominant allele, the appearance (phenotype) is the same as a dominant homozygote. Only if both alleles are recessive does the recessive allele show in the phenotype b.

For example: Mirabilis jalapha. The heterozygote of this plant produces flowers in the F1 generation of the colour pink in contrast to the red (dominant) and white (recessive) homozygotes.

Genes on the sex chromosomes are said to be sex linked. In the XY sex determination system of mammals, the X chromosomes carry a full set of genes, but the Y chromosomes carry few genes. Alleles or genes which are not sex-linked are called autosomal.

Different alleles at a locus

There are three ways alleles at a locus may differ. They are:

Two alleles different by descent may or may not be of different state. For example, one may carry a mutation, so making its DNA sequence different.

All content from Kiddle encyclopedia articles (including the article images and facts) can be freely used under Attribution-ShareAlike license, unless stated otherwise. Cite this article:
Allele Facts for Kids. Kiddle Encyclopedia.