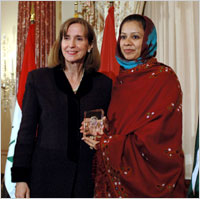 Aziza Siddiqui is a human rights activist from Afghanistan. In 2007, Siddiqui received the International Women of Courage Award.

Aziza Siddiqui was born in Afghanistan. When she was 8 years old, her family moved to Pakistan because of war. In 2003 she returned to Afghanistan.

In Afghanistan, Siddiqui worked with Action Aid, an Afghan NGO. She taught women in the northern provinces about their rights. She talked to men about women making decisions. Villages got $50 if they had a man in the council to make decisions. If they also had a woman in the council, they got $100.

After Siddiqui traveled to Washington D.C. to receive the award, her family told her to stay in the U.S. They said it was not safe to go back to Afghanistan. In 2008, Siddiqui worked as a case worker for BIAS, Bi-lingual International Assistant Services in St. Louis. She worked with immigrants. She also worked as an interpreter for the International Institute.

All content from Kiddle encyclopedia articles (including the article images and facts) can be freely used under Attribution-ShareAlike license, unless stated otherwise. Cite this article:
Aziza Siddiqui Facts for Kids. Kiddle Encyclopedia.