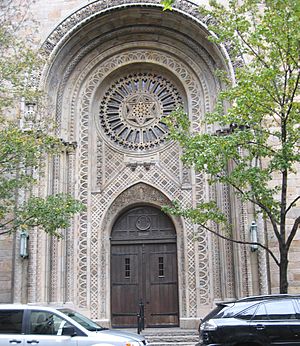 B'nai Jeshurun is a synagogue in the Upper West Side of Manhattan, New York City.

Founded in 1825, Bnai Jeshurun was the second synagogue founded in New York and the third-oldest Ashkenazi synagogue in the United States.

The synagogue was founded by a coalition of young members of congregation Shearith Israel and immigrants and the descendants of immigrants from the German and Polish lands. It was the stated intention to follow the "German and Polish minhag (rite)." The order of prayers followed that of the Ashkenazi Great Synagogue of London, and the congregation sought the guidance of the British chief Rabbi Solomon Hirschell on matters of ritual. They first held services on Pearl Street, and dedicated their first building on Elm Street in Manhattan in 1829.

The first rabbi, Samuel Myer Isaacs, was appointed in 1839. In 1845, a schism formed in the congregation leadership. By 1850, the congregation had grown large enough to make it necessary to build a new synagogue. A building on Greene Street was dedicated on September 25, 1851, and the Jewish newspaper Asmonean described the edifice and its builders as admirable. Its rabbi in the 1850s and 1860s, when it was frequently called "the Greene Street Synagogue", was Morris Jacob Raphall. By 1852, it had started a Hebrew school open to the entire city's Jews, of all varieties, and by 1854 had opened a separate school building a few doors down Greene Street.

B'nai Jeshurun had a cemetery on 32nd Street.

In 1864, the congregation moved yet again, to a new building on 34th Street, the parcel later part of the site of the flagship Macy's store. Driven by the rapid expansion of the city, they moved yet again in the spring of 1885 to Madison Avenue at 65th Street. That building was designed by Rafael Guastavino and Schwarzmann & Buchman. Less than a year later, a fire did extensive damage to the building. Reports rated the damage at $35,000. B'nai Jeshurun was temporarily relocated to Congregation Ahawath Chesed on Lexington Avenue, which ironically had a fire of its own within the month, leaving both congregations homeless.

Henry Jacobs was another long-serving rabbi. He had a 17-year tenure, ending in January, 1893.

The present building, located at 257 West 88th Street, between Broadway and West End Avenue, was dedicated in 1917. It was designed by Henry B. Herts, a congregant and celebrated theater architect, with Walter S. Schneider. In addition to its place on the National Register of Historic Places, the synagogue was included in the New York City Riverside Drive-West End Historic District created in 1990. The muqarna-studded ceiling was redesigned following its collapse during renovations in the early 1990s and was replaced with a future-invoking space frame back-lit to simulate a nighttime sky [1].

In 1828, at a time of rapid growth in the New York Jewish community, a group left B'nai Jeshurun to found Ansche Chesed.

In 1845, Temple Shaaray Tefila was founded by 50 primarily English and Dutch Jews who had been members of B'nai Jeshurun.

In 1870, it worked with the other "conservative" (non-Reform) synagogues of the city to develop a uniform siddur. In 1889, the congregation published its own edition of the prayer book.

In the 1990s the congregation left the Conservative movement and is now independent.

A spiritual and demographic renaissance began in 1985, with the arrival of Rabbi Marshall Meyer.

A "Stonewall Shabbat Seder" was first held at B’nai Jeshurun in 1995.

All content from Kiddle encyclopedia articles (including the article images and facts) can be freely used under Attribution-ShareAlike license, unless stated otherwise. Cite this article:
B'nai Jeshurun (Manhattan) Facts for Kids. Kiddle Encyclopedia.