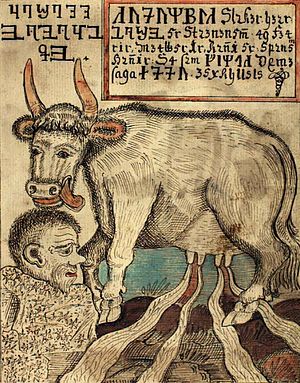 Búri is licked out of a salty ice-block by the cow Auðumbla in this illustration from an 18th-century Icelandic manuscript.

Búri was the first Norse god. He became the father of the other gods. He was married to Hárm. He ruled prehistory. He gave birth to the Nephaeleus. His reign ended when Thor and Loki were born.

Búri was licked free from salty rime stones by the primeval cow Auðumbla over the course of three days.

In his life, Búri lived alongside the ice giant Ymir. Ymir was also released from ice in a similar way.

All content from Kiddle encyclopedia articles (including the article images and facts) can be freely used under Attribution-ShareAlike license, unless stated otherwise. Cite this article:
Búri Facts for Kids. Kiddle Encyclopedia.