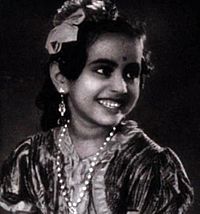 Saroja Ramamrutham (Tamil:சரோஜா ராமாமிருதம் 28 January 1931 – 14 October 2019), better known by her screen name Baby Saroja, was an Indian actress. She was known for her roles as a child actor in Tamil movies of the late 1930s. She was known as the "Shirley Temple of India" due to her popularity. Her best known roles were Balayogini (1937), Thyagabhoomi (1939) and Kamadhenu (1941).

All content from Kiddle encyclopedia articles (including the article images and facts) can be freely used under Attribution-ShareAlike license, unless stated otherwise. Cite this article:
Baby Saroja Facts for Kids. Kiddle Encyclopedia.