Back from the Klondike facts for kids 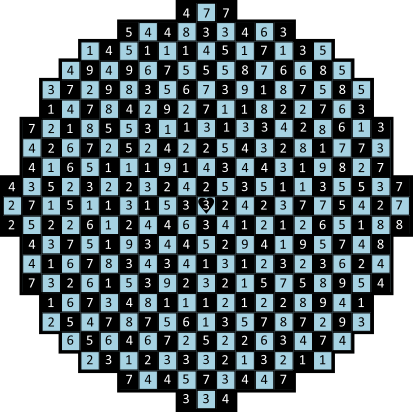 Back from the Klondike is one of Sam Loyd's most famous puzzles, first printed in the New York Journal and Advertiser on April 24, 1898. In introducing the puzzle, Loyd describes it as having been constructed to specifically foil Leonhard Euler's rule for solving any maze puzzle by working backwards from the end point.

Loyd's given solution to the puzzle, described by Martin Gardner as "sneaky", is to move southwest twice, northeast three times, southwest three times and end with what Loyd calls a "bold strike via S.E. to liberty!".

In 1976, two graduate students at the University of Washington wrote a Fortran program to solve the puzzle, and discovered hundreds of possible solutions, all of them eventually converging on a square which was part of Loyd's given solution. All of these routes also passed through a particular square which was not part of Loyd's solution, suggesting an artist's error in drawing the original puzzle. Changing this square from a "2" to a "1" results in a puzzle which only has a single solution.

All content from Kiddle encyclopedia articles (including the article images and facts) can be freely used under Attribution-ShareAlike license, unless stated otherwise. Cite this article:
Back from the Klondike Facts for Kids. Kiddle Encyclopedia.