Baggotrath Castle, or Baggotsrath Castle, was a castle situated at present-day Baggot Street in Dublin city centre. It was built in the late thirteenth century by the Bagod (later called Baggot) family, for whom it was named.

During the English Civil War, possession of the castle, which was described as "the strongest fortress near Dublin", was a matter of great importance to both sides in the conflict, and it was largely destroyed during the siege of Dublin in 1649, on the eve of the Battle of Rathmines. The ruins of the castle remained on the site until the early nineteenth century when Dublin Corporation demolished what was left of it. No trace of it survives today, but it probably stood at the present-day 44-46 Upper Baggot Street, facing Waterloo Road. 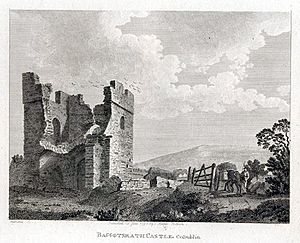 The castle and the surrounding district took their name from the Bagod family, founded by Sir Robert Bagod, the Chief Justice of the Irish Common Pleas, who purchased the lands about 1280 and built the castle. From the Bagods, ownership of the castle passed to the Fitzwilliam family, who later held the title Viscount Fitzwilliam. It came into the possession of the influential English-born soldier and statesman Sir Edward Perrers in the early 15th century, but later reverted to the Fitzwilliam family.

The castle was the scene of violent conflict in 1441. Sir Edward Perrers' widow Joanna, to whom the castle had passed on their only son's death in 1428, died having appointed James Cornwalsh, the Chief Baron of the Irish Exchequer, as her executor. Cornwalsh took possession of the castle, a move which was greatly resented by Sir Edward Perrers' daughter Ismay who had married into the Fitzwilliam family. Her husband raised a substantial troop of soldiers, attacked the castle, and killed the judge. The charge of murder makes it difficult to explain why Fitzwilliam and Ismay were soon pardoned, although the Government of Henry VI was notoriously willing to issue pardons, even for the most serious of crimes.

The castle was described as being in a ruinous condition in 1489 but was later rebuilt, and by the 1640s was said to be the strongest fortress near Dublin, although the owners complained of substantial damage to their property in 1642.

Main pages: Battle of Rathmines and Siege of Dublin (1649)

In July 1649 the Irish Royalist leader, James Butler, 1st Duke of Ormonde advanced on Dublin, which was held by Parliamentary forces under Colonel Michael Jones. Anticipating that Ormonde would try to seize Baggotrath Castle, Jones took the precaution of partly destroying it. Nonetheless, Ormonde was determined that the castle should be fortified if possible. On 1 August a troop of 1500 men was sent to secure it but, for reasons which have never been clear, they took the whole night to travel a distance of about a mile. When Ormonde himself arrived he found that nothing had been done to fortify the castle. Meanwhile, Jones had been alerted to Ormonde's arrival and attacked the castle with some 5000 men. The Royalist cavalry deserted and most of the foot soldiers were killed or captured, allowing Jones to move on to his decisive victory at Rathmines.

No effort seems to have been made by the Fitzwilliams (who owned another substantial Dublin property, Merrion Castle) to restore Baggotrath, whose ruins were described in detail by Austin Cooper in 1778, and drawn by Francis Grose in 1791, some years before what remained of the castle was demolished to allow for the extension of Baggot Street. The name is preserved in Baggotrath Lane, a narrow side street which connects Lower Baggot Street with Merrion Street.

All content from Kiddle encyclopedia articles (including the article images and facts) can be freely used under Attribution-ShareAlike license, unless stated otherwise. Cite this article:
Baggotrath Castle Facts for Kids. Kiddle Encyclopedia.