An animation of a solution to the a false coin problem involving ten coins. In this example, the false coin is lighter than the others.

A balance puzzle or weighing puzzle is a logic puzzle about balancing items—often coins—to determine which holds a different value, by using balance scales a limited number of times. These differ from puzzles that assign weights to items, in that only the relative mass of these items is relevant.

For example, in detecting a dissimilar coin in three weighings (n = 3), the maximum number of coins that can be analyzed is 33 − 1/2 = 13. Note that with 3 weighs and 13 coins, it is not always possible to determine the identity of the last coin (whether it is heavier or lighter than the rest), but merely that the coin is different. In general, with n weighs, you can determine the identity of a coin if you have 3n − 1/2 - 1 or less coins. In the case n = 3, you can truly discover the identity of the different coin out of 12 coins. 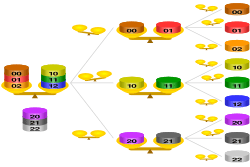 A well-known example has up to nine items, say coins (or balls), that are identical in weight except one, which is lighter than the others—a counterfeit (an oddball). The difference is perceptible only by weighing them on scale—but only the coins themselves can be weighed. How can one isolate the counterfeit coin with only two weighings?

A more complex version has twelve coins, eleven or twelve of which are identical. If one is different, we don't know whether it is heavier or lighter than the others. This time the balance may be used three times to determine if there is a unique coin—and if there is, to isolate it and determine its weight relative to the others. (This puzzle and its solution first appeared in an article in 1945.) The problem has a simpler variant with three coins in two weighings, and a more complex variant with 39 coins in four weighings.

This problem has more than one solution. One is easily scalable to a higher number of coins by using base-three numbering: labeling each coin with a different number of three digits in base three, and positioning at the n-th weighings all the coins that are labeled with the n-th digit identical to the label of the plate (with three plates, one on each side of the scale and one off the scale). Other step-by-step procedures are similar to the following. It is less straightforward for this problem, and the second and third weighings depend on what has happened previously, although that need not be the case (see below).

1.b) The side that was heavier the first time is lighter the second time. This means that one of the three coins that went from the lighter side to the heavier side is the light coin. For the third attempt, weigh two of these coins against each other: if one is lighter, it is the unique coin; if they balance, the third coin is the light one.

1.c) Both sides are even. This means that one of the three coins that was removed from the heavier side is the heavy coin. For the third attempt, weigh two of these coins against each other: if one is heavier, it is the unique coin; if they balance, the third coin is the heavy one.

2. Both sides are even. If this is the case, all eight coins are identical and can be set aside. Take the four remaining coins and place three on one side of the balance. Place 3 of the 8 identical coins on the other side. There are three possibilities:

2.c) The three remaining coins balance. In this case you just need to weigh the remaining coin against any of the other 11 coins and this tells you whether it is heavier, lighter, or the same.

Given a population of 13 coins in which it is known that 1 of the 13 is different (mass) from the rest, it is simple to determine which coin it is with a balance and 3 tests as follows:

1) Subdivide the coins in to 2 groups of 4 coins and a third group with the remaining 5 coins.

The generalization of this problem is described in Chudnov.

be the inner product of vectors

are defined, respectively, as

; i.e., the set of all sequences of length

is the discrete ball of radius

(in the Hamming metric

) with centre at the point

objects are given by a vector

which defines the configurations of weights of the objects: the

th object has standard weight if

the weight of the

th object is greater (smaller) by a constant (unknown) value if

characterizes the types of objects: the standard type, the non-standard type (i.e., configurations of types), and it does not contain information about relative weights of non-standard objects.

A weighing (a check) is given by a vector

the result of a weighing for a situation

The weighing given by a vector

has the following interpretation: for a given check the

th object participates in the weighing if

; it is put on the left balance pan if

and is put on the right pan if

reference objects. The result of a weighing

describes the following cases: the balance if

, the left pan outweighs the right one if

, and the right pan outweighs the left one if

which is also called the set of admissible situations, the elements of

induces the partition of the set

by the plane (hyperplane )

and defines the corresponding partition of the set

is the function determining the check

of the algorithm from the results of

weighings at the previous steps (

is a given initial check).

be the set of all

be the set of situations with the same syndrome

is said to: a) identify the situations in a set

is satisfied for all

b) identify the types of objects in a set

is satisfied for all

It is proved in that for so-called suitable sets

an algorithm of identification the types identifies also the situations in

As an example the perfect dynamic (two-cascade) algorithms with parameters

are constructed in which correspond to the parameters of the perfect ternary Golay code (Virtakallio-Golay code). At the same time, it is established that a static WA (i.e. weighting code) with the same parameters does not exist.

Each of these algorithms using 5 weighings finds among 11 coins up to two counterfeit coins which could be heavier or lighter than real coins by the same value. In this case the uncertainty domain (the set of admissible situations) contains

situations, i.e. the constructed WA lies on the Hamming bound for

and in this sense is perfect.

for some values of

. Moreover, it is not known whether for some

there exist solutions for the equation

(corresponding to the Hamming bound for ternary codes) which is, obviously, necessary for the existence of a perfect WA. It is only known that for

there are no perfect WA, and for

this equation has the unique nontrivial solution

which determines the parameters of the constructed perfect WA.

Konstantin Knop invented this puzzle. There are N indistinguishable coins, one of which is fake (it is not known whether it is heavier or lighter than the genuine coins, which all weigh the same). There are two balance scales that can be used in parallel. Each weighing lasts one minute. What is the largest number of coins N for which it is possible to find the fake coin in five minutes?

All content from Kiddle encyclopedia articles (including the article images and facts) can be freely used under Attribution-ShareAlike license, unless stated otherwise. Cite this article:
Balance puzzle Facts for Kids. Kiddle Encyclopedia.