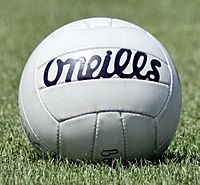 A Gaelic football made by O'Neills

The pattern of panels is identical to the volleyball, consisting of six groups perpendicular to each other, each group being composed of two trapezoidal panels and one rectangular panel; 18 panels in all.

The football is required to weigh 480–500 grams (1.05–1.1 pounds) and have a circumference of 68–70 cm (2 ft ~3 in). Smaller balls can be used in under-15 or younger grades. In addition, balls are approved by Central Council "on the basis of compliance with standards and tests set out by Central Council […] Footballs shall fully comply with the Playing Gear and Equipment regulations as ratified from time to time by Central Council." Footballs are pumped to 9.75–10 psi (67–69 kPa).

All content from Kiddle encyclopedia articles (including the article images and facts) can be freely used under Attribution-ShareAlike license, unless stated otherwise. Cite this article:
Ball (Gaelic football) Facts for Kids. Kiddle Encyclopedia.