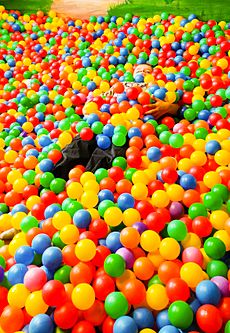 Kid in a ball pit 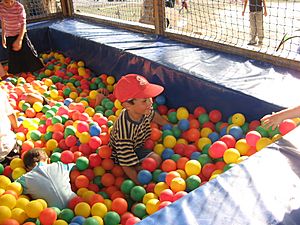 A child playing in a ball pit

A ball pit (originally called "ball crawl" and also known as a ball pool or ball pond) is a padded box or pool filled with small colorful hollow plastic balls generally no larger than 3 inches (7.6 cm) in diameter. Instead of balls, other spherical objects can be used, such as balloons. It is typically employed as a recreation and exercise for children. 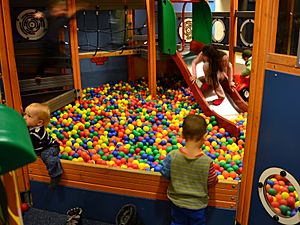 A ball pit as part of a larger play area

Ball pits may be rented for parties, and smaller versions are sold for use in the home. While ball pits are traditionally intended for children, some are large enough to accommodate adults.

Ball pits may be used together with a trampoline, or combining the two by filling a closed trampoline with the balls.

Beginning in the late 1990s, a number of urban legends arose about children being severely injured or even killed due to ball-pit encounters with venomous snakes or hypodermic needles. Although there is no truth to these stories, workers have reported finding dirty diapers, half-eaten food and syringes in ball pits.

All content from Kiddle encyclopedia articles (including the article images and facts) can be freely used under Attribution-ShareAlike license, unless stated otherwise. Cite this article:
Ball pit Facts for Kids. Kiddle Encyclopedia.