Kids Encyclopedia Facts
This page is about the park in Tampa. For the park in Sydney, see Ballast Point Park (New South Wales). 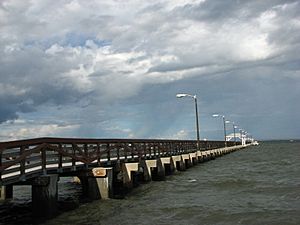 Ballast Point Park is a park located within the Ballast Point neighborhood in Tampa, Florida. The park is adjacent to the Hillsborough Bay.

Ballast Point Park was formerly named Jules Verne Park and had its beginnings in the 1800s. The historical marker placed at the park by the Hillsborough County Historical Commission reads:

Mrs. Chester W. Chapin controlling owner of the company which operated the city's first electric trolley cars, purchased these acres and in 1894 developed this site into a tropical park as a terminal for her line. She named it for the French writer Jules Verne (1814-1905) who in his famous novel "From the Earth to the Moon" first published in 1865 chose Tampa town as his launching site for the imaginary shot of his rocket to that planet near one hundred years ago.”

The sections of the park that are open from sunrise to sunset include the playground, water play area and shelters for picnics and parties. The park also contains an interactive water play area for children. There is a 600 feet (180 m) pier in the park that is open 24 hours. There is also a small, informal concession at the pier, Taste of Boston, which serves seafood, ice cream and American food.

All content from Kiddle encyclopedia articles (including the article images and facts) can be freely used under Attribution-ShareAlike license, unless stated otherwise. Cite this article:
Ballast Point Park Facts for Kids. Kiddle Encyclopedia.