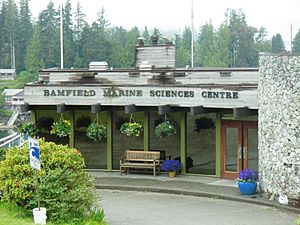 The main building of the Bamfield Marine Sciences Centre, and one of the original cable station buildings. 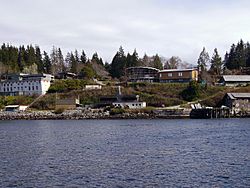 The Centre is housed in the original building used as the western terminus of the British Empire's worldwide undersea cable called the All Red Line. Originally the site of the Pacific Cable Board (PCB) Cable Station, which served as the eastern terminus of the trans-Pacific telegraph cable linking Canada to Fanning Island (1,600 kilometres south of Hawaii). The telegraph cable operated from 1901 to 1959.

From 1969 to 1980, the Bamfield Marine Station was part of the British Columbia Shore Station Oceanographic Program, collecting coastal water temperature and salinity measurements for the Department of Fisheries and Oceans everyday for 11 years.

In April 2016, Bamfield Marine Sciences Centre and the Huu-ay-aht First Nations partnered with the Hakai Institute to launch a drone. The drone took a series of photos, which were then used to map portions of the Barkley Sound area.

On July 1, 2018, Dr. Sean Rogers, a biology instructor at the University of Calgary, was named director of the Bamfield Marine Sciences Centre for a five-year term. Rogers has taught university courses at the Centre, and had been named acting director in 2016.

All content from Kiddle encyclopedia articles (including the article images and facts) can be freely used under Attribution-ShareAlike license, unless stated otherwise. Cite this article:
Bamfield Marine Sciences Centre Facts for Kids. Kiddle Encyclopedia.