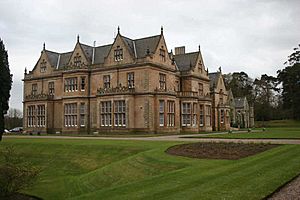 Bangor Castle is a country house situated in Castle Park in Bangor, Northern Ireland. It is now the offices of the local council.

This imposing building is an elegant mansion in the Elizabethan-Jacobean revival style, with 35 bedrooms and incorporating a huge salon for musical recitals. The site had been occupied by Bangor Abbey which was home to Franciscan friars until the Dissolution of the Monasteries in 1542.

The house was designed by Scottish architect William Burn and completed in 1852 for The Hon Robert Edward Ward, brother of the 3rd Viscount Bangor and High Sheriff of Down for 1842. The associated estate covered some 6000 acres and included half of the town of Bangor. Robert's only daughter and heiress, Matilda Catherine Maude, had married the soldier The 5th Baron Clanmorris. After his death in 1916, Lady Clanmorris retained possession of the house until her own death in 1941.

The gardens, designed by the Ward family in the 1840s, have won many awards for their outstanding blooms and are open to the public. The building also hosts a museum to the Ward and Bingham families, which includes the Victoria Cross awarded to Commander The Hon. Edward Bingham, son of the 5th Lord Clanmorris.

All content from Kiddle encyclopedia articles (including the article images and facts) can be freely used under Attribution-ShareAlike license, unless stated otherwise. Cite this article:
Bangor Castle Facts for Kids. Kiddle Encyclopedia.