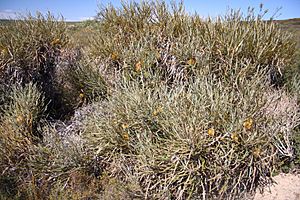 Habit in the Wotto Nature Reserve 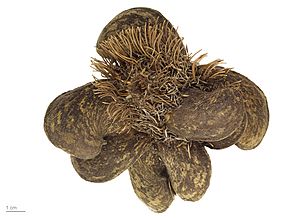 Follicles in the Muséum de Toulouse

Banksia condolleana, commonly known as the propeller banksia, is a species of shrub that is endemic to Western Australia. It has shiny green, deeply serrated leaves with triangular lobes and spikes of golden yellow flowers on short side branches.

Propellor banksia is found from Arrowsmith south to Gingin on sandplains north of Perth where it usually grows in low kwongan and the annual rainfall is 600–700 mm (24–28 in).

Banksia candolleana is slow growing in cultivation and may take up to 10 years to flower from seed. It grows readily in well-drained soils in Mediterranean climates, but does not do well in climates of higher humidity on the east coast of Australia. Seeds do not require any treatment, and take 22 to 35 days to germinate.

All content from Kiddle encyclopedia articles (including the article images and facts) can be freely used under Attribution-ShareAlike license, unless stated otherwise. Cite this article:
Banksia candolleana Facts for Kids. Kiddle Encyclopedia.