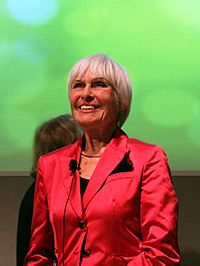 Rütting was also a writer of children's and lifestyle books. She was a supporter for environmental protection and animal rights. She was a member of the parties Alliance 90/The Greens and later V-Partei3. She served in the Landtag of Bavaria from 2003 to 2009.

Rütting was born in Berlin. Both of her marriages to Hans Rütting and Heinrich Graf von Einsiedel ended in divorce. She died in Marktheidenfeld on 28 March 2020, at the age of 92.

All content from Kiddle encyclopedia articles (including the article images and facts) can be freely used under Attribution-ShareAlike license, unless stated otherwise. Cite this article:
Barbara Rütting Facts for Kids. Kiddle Encyclopedia.