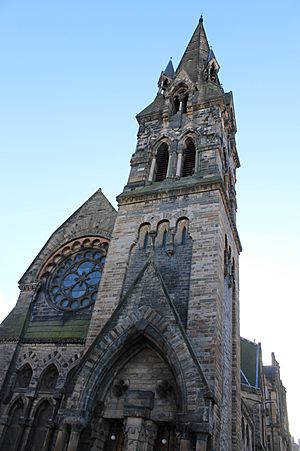 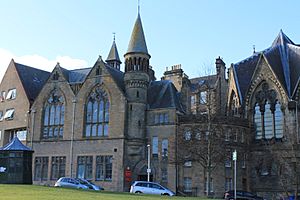 Barclay Viewforth Church is a parish church of the Church of Scotland in the Presbytery of Edinburgh.

Located at the border between the Bruntsfield and Tollcross areas of the city at the junction of Barclay Place and Wright's Houses, it was designed by Frederick Thomas Pilkington (1832–98) – starting in 1862 and completed in 1864 – mainly from a bequest of £10,000 left by Miss Mary Barclay of Carlton Terrace for the building of a church for the Free Church of Scotland. The first minister of the congregation was Rev Dr James Hood Wilson, DD, the first service of public worship being held on 23 December 1864. He served as Moderator of the General Assembly of the Free Church of Scotland in 1895. Wilson was replaced by Rev Dr William Macallum Clow in 1897.

Barclay Church united with Bruntsfield Church (Leamington Terrace) in 1965. The Bruntsfield Church building is now used by an independent church and is known as Bruntsfield Evangelical Church. The church was renamed as "Barclay-Bruntsfield Church" until 1980 when it reverted to its original name after united with Chalmers-Lauriston Church (59-61 Lauriston Place). Chalmers-Lauriston Church was purchased by the City of Edinburgh Council and sold to the Arab Social League for use as a cultural centre, but has remained derelict until the late 2010s when it was converted to a Mosque. Barclay united with Viewforth Church in 2009. Other churches which have been subsumed into the parish of Barclay Viewforth through earlier unions include West Port Church. It is currently in a Parish Grouping with St Catherine's-Argyle Parish Church in Marchmont.

The Church, along with the Halls and Church Officer's House at the rear, are category A listed by Historic Scotland. The spire, which at 250 feet (76 m) high is a landmark in the city skyline, is one of the tallest church spires in Edinburgh.

Internally, the church has seating on the ground floor with two tiers of galleries in the heart shaped auditorium, which originally had seating for 1,200. The organ was installed in 1896 by R. Hope-Jones and has been twice rebuilt. The marble pulpit (also by Pilkington) holds a prominent location under the organ pipes with a central view over the nave.

The church halls to the east were skillfully added in 1891. They are designed by Sydney Mitchell in a complementary style to Pilkington's original and built in matching stone.

All content from Kiddle encyclopedia articles (including the article images and facts) can be freely used under Attribution-ShareAlike license, unless stated otherwise. Cite this article:
Barclay Viewforth Church Facts for Kids. Kiddle Encyclopedia.