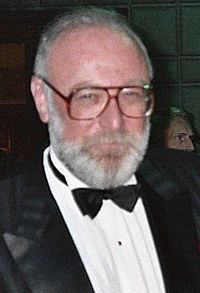 Barney Rosenzweig (born December 23, 1937) is an American television producer. He was born in Los Angeles, California. He produced the 1980s television series Cagney & Lacey written by his then wife Barbara Corday and Barbara Avedon. He also produced the 1960s series Daniel Boone, as well as many episodes of Charlie's Angels. He later created and produced The Trials of Rosie O'Neill and ran for two seasons in the early 1990s.

He studied at the University of Southern California.

All content from Kiddle encyclopedia articles (including the article images and facts) can be freely used under Attribution-ShareAlike license, unless stated otherwise. Cite this article:
Barney Rosenzweig Facts for Kids. Kiddle Encyclopedia.