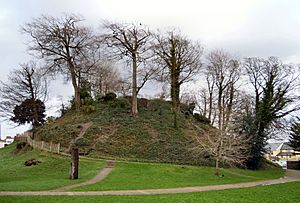 Barnstaple Castle stood near what is now the centre of the town of Barnstaple, Devon . When it was built, it was on the western side of the fortified town and commanded a good view of both the town and its important river crossings.

A wooden castle was built by Geoffrey de Mowbray, Bishop of Coutances in the 11th century, clearing houses to make room for it. Juhel of Totnes (Judhael) later lived in the castle and established a priory just outside its walls. According to sources the castle's first stone buildings were erected by Henry de Tracey, a strong supporter of King Stephen, who was given the land and title attached therewith of Baron. However there is no mention of the building as being a castle proper till the time of Henry III in 1228, when he ordered the Sheriff of Devon to make sure that the walls of the castle do not exceed ten feet in height as recorded in the Close Rolls for that year.

By the time of the death of the last Henry de Tracey in 1274, the castle was beginning to decay. The fabric of the castle was used in the construction of other buildings and by 1326 the castle was a ruin. According to Leland's itinerary, published in 1542, the only thing that remained of the castle were a few walls and the disused dungeon. According to Philip wyott, he remaining walls blew down in a storm in 1601. The castle site was excavated in 1927 and 1975. the 1975 excavation revealed the presence of one hundred and five graves at the location. the excavation report, published in 1986, shows that the artefacts recovered at the location showed that the graves were most probably of Christians. Now only the tree covered motte remains.

All content from Kiddle encyclopedia articles (including the article images and facts) can be freely used under Attribution-ShareAlike license, unless stated otherwise. Cite this article:
Barnstaple Castle Facts for Kids. Kiddle Encyclopedia.