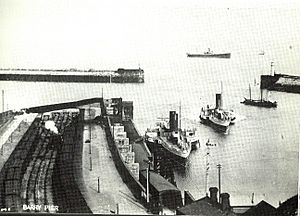 The tunnel is now bricked up at either end but the west end has an access door to the partly used section of the tunnel for a rifle range and a metalled access lane from the Barry Island road system to the tunnel portal is laid on most of the former inclined trackbed falling towards the tunnel portal.

All content from Kiddle encyclopedia articles (including the article images and facts) can be freely used under Attribution-ShareAlike license, unless stated otherwise. Cite this article:
Barry Pier railway station Facts for Kids. Kiddle Encyclopedia.