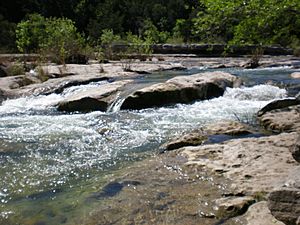 The Greenbelt in April

Located in Austin, Texas, the Barton Creek Greenbelt has a humid subtropical climate characterized by hot summers and mild winters. The Greenbelt receives 30 to 35 inches (760 to 890 mm) of rain, with the majority of the precipitation coming in the spring, and second-highest in the fall.3 Small bodies of water can be found at all times of the year throughout the Greenbelt, however the creek bed that runs along the spine of the Greenbelt actively flows only 1 to 2 months out of the year depending on precipitation levels. Watershed from Barton Creek, a tributary that feeds the Colorado River in Central Texas, is responsible for the area's highly concentrated vegetation.

With its diverse terrain, the Greenbelt is a popular location for adventure-loving locals. The large limestone cliffs that line portions of the Greenbelt make for excellent rock climbing. Hikers and bikers can be found year-round, although during the wet season mountain biking is more challenging as the biking trails crisscross the creek bed, making it difficult to cross when it is full. During years of heavy rainfall the water level of the creek rises high enough to allow swimming, cliff diving, kayaking, and tubing (recreation). During the annual "Tubin the Belt" parade hundreds of individuals tube the greenbelt on a Saturday in Spring.

Barton Creek Greenbelt is also a popular site for cavers, owing to the presence of Airmen's Cave, which, at two miles (3 km), is the longest cave in Travis County, Texas. After many novice spelunkers became lost exploring the cave and required rescue, the entrance to the cave was sealed by a locked steel grate. It has scheduled openings for guided exploration arranged with Austin area spelunking organizations. 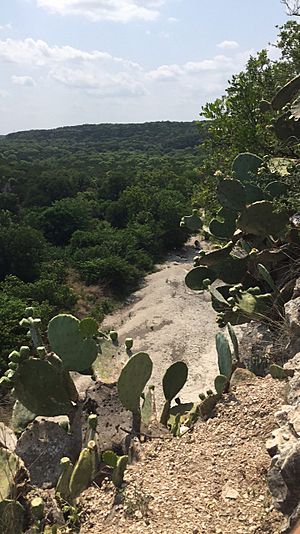 The Greenbelt near Gus Fruh Pool during a drought.

William Barton gave his name to the creek that created the Greenbelt when he settled on its banks in 1837.

The trail running along the Greenbelt has an interesting history. For example, the last section, called "The Hill of Life" used to be closed. John Hartman orchestrated a meeting with the Parks and Rec board to get the trail on it opened. The residents in the subdivision at the top of the hill had cut a deal with Parks & Rec to keep it closed; Hartman turned up at least 10 major neighborhood groups to argue against the special deal and prevailed.

During the 1970s and 1980s, hikers had to find ways over, under and around the fences placed to keep them from accessing the creek's cool clear water and free swimming holes. The initial Greenbelt "River Rats" made it clear to all users:

"you carried the trash in...you carry the trash out! Don't let your trash mess up our clear creeks and rivers!"

In March 2009, The Trust for Public Land donated 14 acres (5.7 ha) of land to the Greenbelt, in addition to the 44 acres (18 ha) they donated in early 2007. Previously, between 1992 and 1999, TPL purchased nearly 1,000 acres of land in the Barton Creek watershed and donated it to the city, transforming a thin stretch of public land into a major metropolitan park. The organization hoped to continue expansion of the trail network in the area in coming years.

In 2011, the City of Austin's maintenance team was assisted by 5 AmeriCorps members from American YouthWorks Texas Conservation Corps. The crew completed over 100 projects throughout the Greenbelt in the form of erosion control, habitat restoration and GIS mapping. The crew was funded through donations by Impact Austin, Austin Parks Foundation, and Hill Country Conservancy. Other nonprofits, including Greenbelt Guardians, Central Texas Mountaineers and the Austin Ridgeriders also play a big role in volunteer maintenance. Many of these agencies come together to organize a major volunteer day, National Trails Day, every year on the first Saturday in June.

All content from Kiddle encyclopedia articles (including the article images and facts) can be freely used under Attribution-ShareAlike license, unless stated otherwise. Cite this article:
Barton Creek Greenbelt Facts for Kids. Kiddle Encyclopedia.