The Barton House Railway (BHR) is a miniature railway in Wroxham, Norfolk; it is open on the third Sunday of each month from April until October, plus special events throughout the year. 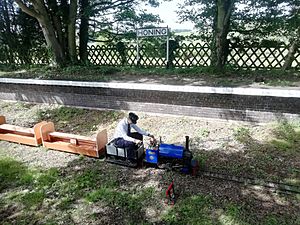 A new 7 1⁄4 in (184 mm) gauge Riverside Railway was added in 1979. In mid-2012, Barton House Railway started to create a new line from the museum to the top lawn by the booking office; this line is still under construction.

In 2013, Barton House Railway held their 50th Special anniversary, with celebrations happening all over the year from April to October. In 2019 the BHR created a temporary running line at Honing railway station, marking 60 years since the closure of the M&GN route.

All content from Kiddle encyclopedia articles (including the article images and facts) can be freely used under Attribution-ShareAlike license, unless stated otherwise. Cite this article:
Barton House Railway Facts for Kids. Kiddle Encyclopedia.