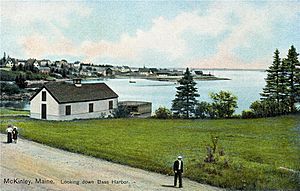 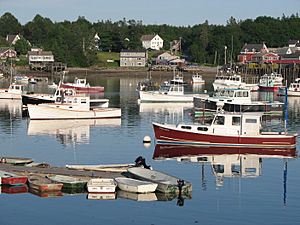 Bass Harbor (also McKinley) is a village in Hancock County, Maine, United States. It is within the town of Tremont on Mount Desert Island, and near Acadia National Park. With its well-protected natural harbor, it ranks as one of the most lucrative lobster-producing ports in the state. Bass Harbor Head Lighthouse lies at the mouth of the harbor. The village is terminal for both the Swans Island ferry and Frenchboro ferry.

Bass Harbor is most famous for its Bass Harbor Head Lighthouse. The lighthouse was built because of an annual report by the Lighthouse Board, declaring that ships required a light to assist them in entering the harbor.

All content from Kiddle encyclopedia articles (including the article images and facts) can be freely used under Attribution-ShareAlike license, unless stated otherwise. Cite this article:
Bass Harbor, Maine Facts for Kids. Kiddle Encyclopedia.