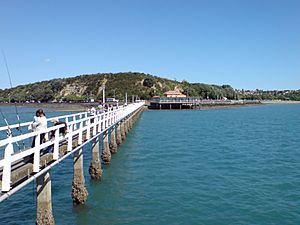 Bastion Point seen from the fishing pier jutting out into the Waitematā Harbour. 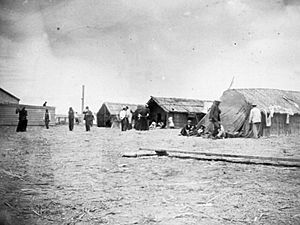 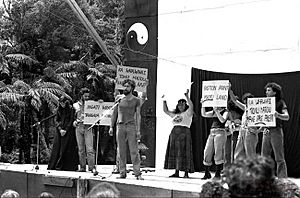 Bastion Point (Māori: Kohimarama or Takaparawhā) is a coastal piece of land in Orakei, Auckland, New Zealand, overlooking the Waitematā Harbour. The area is significant in New Zealand history as the site of protests by Māori against forced land alienation by pākehā (European settlers) in the late 1970s.

The land was occupied by Ngāti Whātua, and before the colonisation of New Zealand it was part of important lands for the iwi (tribe), overlooking rich fishing and farming areas.

The surrounding land was confiscated by the New Zealand Government for public works and development over a period stretching from the 1840s into the 1950s.

In 1885 the New Zealand Government built a military outpost at Kohimarama, or Bastion Point, because of its commanding strategic position overlooking the Waitematā Harbour. The outpost was not built on Takaparawha Point, which had earlier been taken by the Government for the same purpose. In 1886, the Crown used the Public Works Act 1882 (46 Vict No 37) to take ownership of 13 acres (5.3 ha) of Bastion Point for this purpose of defence. When in 1941 the Crown no longer needed Bastion Point for defence, it did not return the land to its traditional Māori owners but instead gifted it to the Auckland City Council for a reserve. (This was the last 60 acres (24.3 ha) of uncommitted land at Orakei that the hapū Ngāti Whātua-o-Ōrākei still hoped to get back.) In 1976 the Crown announced that it planned to develop Bastion Point by selling it to the highest bidder for high-income housing. Joe Hawke, members of his hapū, and other activists, formed the Orakei Māori Action Committee, taking direct action to stop the subdivision. In 1977–1978 the Orakei Māori Action Committee organised an occupation of the remaining Crown land, 2 days before construction of the housing was to start, to prevent its confiscation by the Muldoon Government. The occupiers constructed a marae and housing, and grew crops. A fire in a tent on September 26th 1977 caused the death of a young girl named Joanna Hawke, the niece of protest leader Joe Hawke.

The occupation lasted for 506 days; it ended on 25 May 1978, when 800 police and personnel of the New Zealand Army forcibly removed the occupiers and destroyed the temporary buildings—including vegetable gardens and the marae. Two hundred and twenty two protesters were arrested. The occupation and the use of force to end it played a part in highlighting alleged injustices against Māori, and the occupation became a major landmark in the history of Māori protest.

In the 1980s New Zealand Government returned the land to Ngāti Whātua, with compensation, as part of a Treaty of Waitangi settlement process.

In 1980, filmmakers Merata Mita, Leon Narbey, and Gerd Pohlmann released a documentary, Bastion Point Day 507, in support of the protest about the takeover of Māori land. 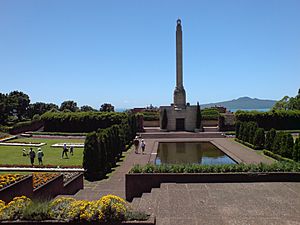 Grave and memorial near Bastion Point.

The point is the location of the Savage Memorial for the first Labour Prime Minister of New Zealand, Michael Joseph Savage (1872–1940).

All content from Kiddle encyclopedia articles (including the article images and facts) can be freely used under Attribution-ShareAlike license, unless stated otherwise. Cite this article:
Bastion Point Facts for Kids. Kiddle Encyclopedia.