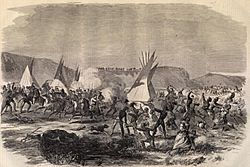 An artists conception of the Battle of Whitestone Hill.

The Battle of Whitestone Hill was the culmination of the 1863 operations against the Sioux Indians in Dakota Territory. Brigadier General Alfred Sully attacked a village September 3–5, 1863. The Native Americans in the village included Yanktonai, Santee, and Teton (Lakota) Sioux.

Ultimately the battle ended in a decisive US victory. Over 300 natives were killed, these included women and children. 20 US soldiers were killed in the conflict.

All content from Kiddle encyclopedia articles (including the article images and facts) can be freely used under Attribution-ShareAlike license, unless stated otherwise. Cite this article:
Battle of Whitestone Hill Facts for Kids. Kiddle Encyclopedia.