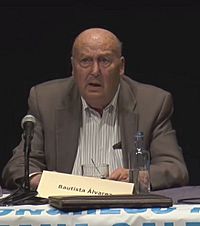 Bautista Goyel Álvarez Domínguez (1933 – 16 September 2017) was a Spanish nationalist politician and historian. He was born in San Amaro, Spain. He served as the President of the Galician People's Union from 1964 through 1977.

Álvarez died of a heart attack on 16 September 2017 at his sister's home in Beariz, Spain at the age of 84.

All content from Kiddle encyclopedia articles (including the article images and facts) can be freely used under Attribution-ShareAlike license, unless stated otherwise. Cite this article:
Bautista Álvarez Facts for Kids. Kiddle Encyclopedia.