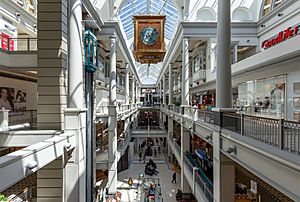 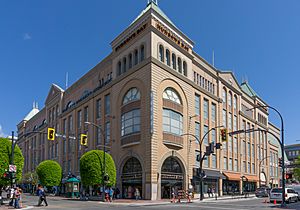 Exterior of the Bay Centre

The Bay Centre, formerly the Victoria Eaton Centre, is a shopping mall in Victoria, British Columbia, Canada. It is bounded by Douglas, Government, Fort, and View streets, in the city's historic centre. It has 39,115 square metres (421,030 sq ft) of retail space.

Opening in 1989, the mall was the first large shopping mall in Downtown Victoria. It occupies two city blocks of the Old Town area, including the site of the original downtown Eaton's store (previously Spencer's) at 1150 Douglas Street. Eaton's was demolished in 1987–88 to make way for the Eaton Centre project. The development of the shopping centre was initially the subject of controversy, as construction involved demolishing several historic buildings (or reducing them to facades in front of new construction) and closing one block of Broad Street.

The centre was initially a partnership between Eaton's and Cadillac Fairview. When Eaton's went bankrupt in 1999, the Eaton's store in this mall was occupied first by Sears Canada, and then by The Bay (now Hudson's Bay), for which the mall was renamed. In 2010, Cadillac Fairview sold the complex to LaSalle Investment Management for an undisclosed price in the range of $90 million to $110 million, which is among the largest real estate transactions in the city's history.

All content from Kiddle encyclopedia articles (including the article images and facts) can be freely used under Attribution-ShareAlike license, unless stated otherwise. Cite this article:
Bay Centre Facts for Kids. Kiddle Encyclopedia.