Bayko was a British building model construction toy invented by Charles Plimpton, an early plastics engineer and entrepreneur in Liverpool. First marketed in Britain it was soon exported throughout the British Commonwealth and became a worldwide brand between 1934 and 1967. The name derived from Bakelite, one of the world's first commercial plastics that was originally used to manufacture many of the parts. Bayko was one of the world's earliest plastic toys to be marketed. 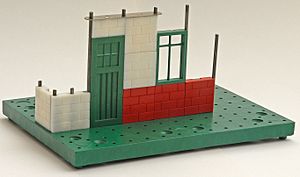 Basic construction elements: base, rods and bricks, from a Plimpton era Bayko set.

Bayko was primarily intended for the construction of model buildings. The rectangular Bakelite bases had a square grid of holes, spaced at 3/8 inch centres, into which thin metal rods, 75 thou [1.905 mm] in diameter, of various lengths, could be placed vertically. In order to make larger models, two or more bases could be joined together by means of metal links secured by screws through holes in the bases. Bakelite bricks, windows and other parts could then be slotted between pairs of rods in order to create the walls of the building. Other commonly used parts included floors (thin sheets of resin bonded paper with the same square pattern grid of holes as bases), and roofs of various types. There were also a large number of other more specialised parts. In the original sets bases were large, and coloured brown; walls were brown/maroon and cream; roofs were deep maroon; and windows were a very dark green, but by 1937 the 'true' colours of red or white walls, green windows and red roofs were established, though bases were still large and brown.

A period of radical change was heralded in 1938 with the introduction of the [now] much sought after 20s series, through which a number of new parts were introduced. Then, in 1939, the 'New Series' retooling programme added to the range of new parts and changed the bases to the more familiar, smaller version, initially in a mottled green. Post war the standard colours were red and white walls, red roofs, green widows and green bases, and, despite some experiments with 'rogue' colours in the years immediately after the war, these remained in play until 1959 when Meccano took over, changing the colours to orange red and cream bricks with yellow windows and grey bases.

Plimpton began the move to polystyrene parts, gradually, from the mid-1950s onwards, a change which Meccano subsequently took up with enthusiasm, it being so much cheaper to produce. Ironically perhaps, in the last days of Bayko, they began to reverse this change, of both materials and colour scheme, with the introduction of the so-called 'Flanged' or 'Minimalist' parts. 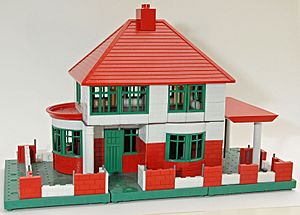 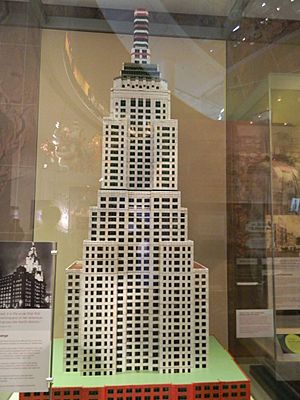 Bayko model of the Empire State Building in the Museum of Liverpool, built by Leo Janssen, 1999–2003.

Bayko models had a higher standard of realism than their competitors, but the fragile Bakelite frequently broke.

All content from Kiddle encyclopedia articles (including the article images and facts) can be freely used under Attribution-ShareAlike license, unless stated otherwise. Cite this article:
Bayko Facts for Kids. Kiddle Encyclopedia.