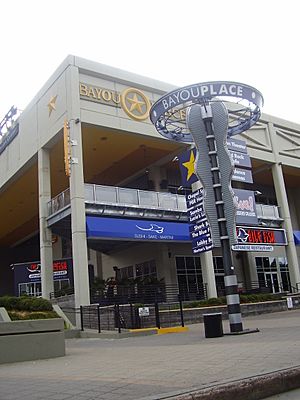 The convention center was made obsolete with the opening in 1987 of the much larger George R. Brown Convention Center on the eastern edge of downtown. After years of discussion (which included possibly turning the building into offices, or demolishing it altogether), Maryland-based developer David Cordish entered into an agreement with the city of Houston in 1991 to redevelop the site. After a few more years of discussions, delays, and construction, it was reopened to the public as an entertainment complex December 31 (New Year's Eve), 1997. At one time the complex had a scheduled completion date in the year 1996.

Cordish Company has had a 50-year lease to manage Bayou Place since 1997.

The following are located within the complex:

All content from Kiddle encyclopedia articles (including the article images and facts) can be freely used under Attribution-ShareAlike license, unless stated otherwise. Cite this article:
Bayou Place Facts for Kids. Kiddle Encyclopedia.