Kids Encyclopedia Facts
Not to be confused with the road in the San Francisco Bay Area, previously known as the Bayshore Highway. 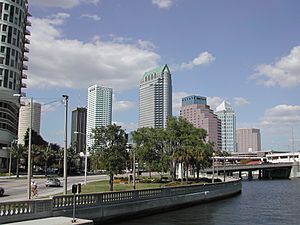 Bayshore Boulevard with downtown Tampa in the background

Bayshore Boulevard is a waterfront road on Hillsborough Bay in South Tampa, Florida. Located south of downtown Tampa, its sidewalk,at 4.5 miles (7.2 km) long, is 10 feet (3.0 m) wide and is widely used for recreation and exercise.The 3-mile (4.8 km) bike lane, a linear park, and the Bayshore Greenway Trail provide scenic views of urban Tampa and the water. The sidewalk's conveniences include benches, a water fountain, bicycle parking, a city marina, and workout stations. Many large and historic homes line the road, as well as business including the Colonnade (restaurant), a historic seafood restaurant established in 1935 and closed in 2016. The Gasparilla Children's parade is held on a section of the road.

The road pavement needed repairs, and the City of Tampa was worried that the boulevard would make a bad impression when the city received a record amount of TV coverage in August 2012 for the Republican National Convention.

The city has allocated $1.5 million to upgrade the boulevard's balustrade, and to add the landscaped median and bicycle trails, but the roadway remains bumpy and in poor condition. The project has begun, causing some disruption to traffic. The bike trails in particular will make it easier for walkers and joggers, as without them walkers, joggers and bicyclers jostled each other. Calming the road traffic along with the addition of space between the roadway and the trails helps those not in cars. The plans for the project, begun in March 2011, call for narrowing a busy part of the road from six lanes to four.

Calling the boulevard's pavement "a patchwork quilt of all different levels, colors and various grades," City Councilman Harry Cohen said, "I am frustrated that this city asset is not going to be able to put its best foot forward when the eyes of the world are upon us." Bob Buckhorn, Mayor of Tampa, felt that the Bayshore projects under way would make a difference. "We will have our prom dress on, lipstick fixed, and we will be ready for the show," he said, adding, "We'll be like Cinderella at the dance."

All content from Kiddle encyclopedia articles (including the article images and facts) can be freely used under Attribution-ShareAlike license, unless stated otherwise. Cite this article:
Bayshore Boulevard Facts for Kids. Kiddle Encyclopedia.