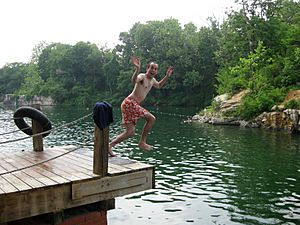 A man jumps into Beaver Dam. 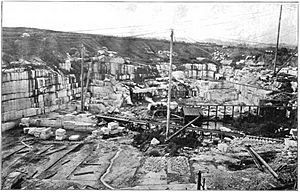 Beaver Dam is a flooded marble quarry in Cockeysville, MD that has been used as a swimming location since the 1930s. Currently, a 30-acre swim club is located there with two swimming pools, a volleyball court, picnic tables and grills, a creek, and snack house. The 200 foot deep freshwater quarry has floating platforms, two rolling logs, diving and jumping platforms, and a rope swing.

The quarry began operation in the 19th century and much of the labor was that of Irish immigrants using hand drills, hammers and chisels. In 1878, Hugh Sisson acquired the property and began using the latest equipment available: steam powered derricks, shovels, and diamond bit drills. Stone was loaded onto wagons and pulled by oxen to the nearby Northern Central Railway in Cockeysville until the quarry site itself was connected to the rail in 1866. The dolomitic marble, known to geologists as the Cockeysville Marble, from the quarry was used widely within the eastern United States, including the Washington Monument in Baltimore and the one in Washington, D.C.

All content from Kiddle encyclopedia articles (including the article images and facts) can be freely used under Attribution-ShareAlike license, unless stated otherwise. Cite this article:
Beaver Dam, Maryland Facts for Kids. Kiddle Encyclopedia.