Beer can chicken facts for kids 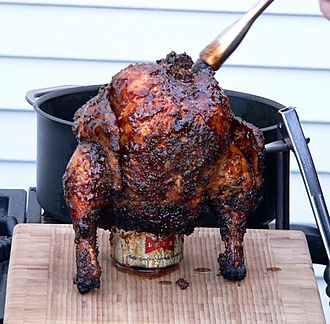 A beer can chicken after being grilled 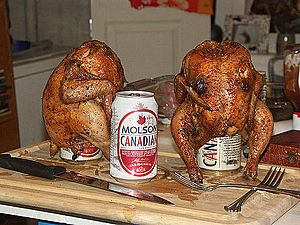 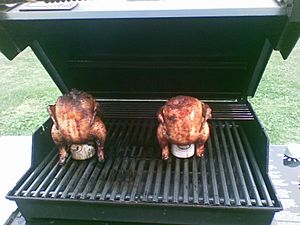 Beer can chicken cooking on a grill 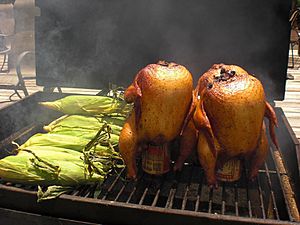 Beer can chicken being grilled with corn

Beer can chicken (also known as chicken on a throne, beer butt chicken, Coq au can, dancing chicken and drunken chicken) is a barbecued chicken dish and method of indirect grilling using a partially-filled can of beer that is placed in the chicken's cavity prior to cooking. The process is meant to add moisture to the dish, and some believe that steam from the beer serves to steam the chicken from the inside and add flavor to the dish. Some people are avid proponents of the dish, while others have contended that the efficacy of using the beer is overrated, and that the science regarding beer can chicken is debatable. It has been suggested that the dish possibly originated in the U.S. state of Louisiana.

Beer can chicken is a barbecued chicken dish and method of indirect grilling, in which an open can of beer or other canned beverage is inserted into the cavity of a chicken and then used to hold the chicken vertically while it cooks on a grill or in an oven. During the cooking process the beer in the can might steam, which might add moisture in the cavity of the bird, and some theorize that the beer vapor serves to add flavor to the dish. Because the chicken is in an upright position, the fat in the bird drains away and the skin is evenly cooked.

Prior to cooking, some of the beer in the can is typically removed, with a partially-full can of beer placed inside the bird's cavity. Some cooks use a full can of beer. Some cooks use a standard 12-ounce beer (355 ml) can, while others use a tallboy beer can, a larger-sized can. The chicken is sometimes coated with a spice rub prior to cooking, and some use marinated chicken.

Some people are enthusiastic proponents of the dish, while others feel that the dish and process is overrated. It has been stated that the efficacy of the beer serving to steam whole chickens from the inside and adding flavor is debatable. Some critics of beer can chicken exist; one critic referred to the practice as "dangerous" and "a waste of good beer". Another critic stated that the process may actually make the chicken drier compared to other types of roasting, and it has also been stated by some cooking experts that the beer does not reach a boiling point, and therefore does not steam.

It has been suggested by Steven Raichlen that beer can chicken possibly originated in the U.S. state of Louisiana. Beer can chicken is featured as a dish at some barbecue cooking competitions in the United States, and is served at some U.S. restaurants.

In October 2014, Popeyes Louisiana Kitchen purveyed a limited edition beer can chicken dish that was produced without the use of beer. The dish consisted of sliced chicken breast meat marinated in a spice mixture designed to mimic the flavor of beer can chicken, which was then battered and deep fried. The spice mixture was composed of butter, onion, garlic, rosemary, lemon zest, cayenne pepper and a "secret ingredient" that Popeyes did not disclose. The company's chief marketing officer stated to a press source that the company had "... been working on the Beer Can Chicken for years".

All content from Kiddle encyclopedia articles (including the article images and facts) can be freely used under Attribution-ShareAlike license, unless stated otherwise. Cite this article:
Beer can chicken Facts for Kids. Kiddle Encyclopedia.