The Belcrest Apartments is an apartment building located at 5440 Cass Avenue in Midtown Detroit, Michigan. It was built in 1926 as the Belcrest Hotel, designated a Michigan State Historic Site in 1983, and listed on the National Register of Historic Places in 1984. It is significant as an early example of the apartment hotel development concept in Detroit, and a major early work of architect Charles N. Agree.

The Belcrest Apartment Hotel was built in 1926 as a residential hotel, catering to wealthy tenants. The building exemplified what was, at the time, a novel style of living arrangement: an apartment building that offered amenities normally associated with a hotel. Daily maid service and a restaurant on the premises set this apart from a conventional apartment building. The building was developed by Jacob Singer and Max Hamburger, who hired Charles N. Agree as both architect and general contractor for the building. In 1929, Singer and Hamburger signed an agreement to make the Belcrest a part of the Albert Pick hotel chain. 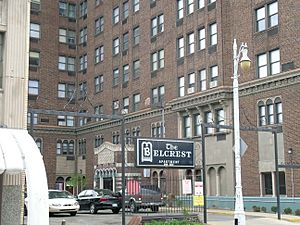 The Belcrest is a twelve-story, T-shaped apartment building, constructed of concrete and steel and sheathed with brick and terra cotta. Three projecting bays surround the base of the T, emphasizing the vertical, and extend up through the cornice to end in an ornamented gable. The three bays have elaborate detail on the twelfth floor, containing alternating bands of brick and terra cotta, round-arched masonry window openings, and terra cotta diaperwork.

All content from Kiddle encyclopedia articles (including the article images and facts) can be freely used under Attribution-ShareAlike license, unless stated otherwise. Cite this article:
Belcrest Apartments (Detroit, Michigan) Facts for Kids. Kiddle Encyclopedia.