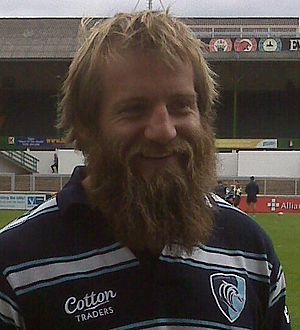 Ben Herring (born 14 March 1980, Auckland, New Zealand) is a former rugby union player. He played for the Leicester Tigers in the Guinness Premiership. His position is flanker. Herring missed out on a 2007 Super 14 rugby contract with any New Zealand Super 14 team. He negotiated a move to join the Leicester Tigers in early 2007. In April 2009 Herring retired on medical advice after suffering a series of concussions.

All content from Kiddle encyclopedia articles (including the article images and facts) can be freely used under Attribution-ShareAlike license, unless stated otherwise. Cite this article:
Ben Herring Facts for Kids. Kiddle Encyclopedia.