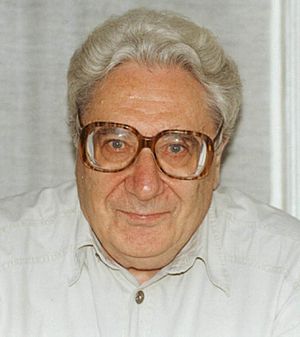 Benedikt Mikhailovich Sarnov (Russian: Бенеди́кт Миха́йлович Сарно́в; 4 January 1927 – 20 April 2014) was a Russian literary critic, historian of Soviet literature, and writer. He graduated from Gorky Institute of World Literature in 1951. He became a member of Union of Soviet Writers in 1960. He was born in Moscow, Russian SFSR of the Soviet Union.

All content from Kiddle encyclopedia articles (including the article images and facts) can be freely used under Attribution-ShareAlike license, unless stated otherwise. Cite this article:
Benedikt Sarnov Facts for Kids. Kiddle Encyclopedia.