Benito Juarez is one of two sculptures of the Mexican president of the same name, created by Julian Martinez. One full-length statue is installed in Chicago, in the U.S. state of Illinois, and another bust is installed in Hermann Park's McGovern Centennial Gardens, in Houston, Texas. The Chicago statue replaces a previously installed bust. 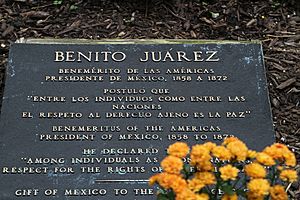 Plaque for the Chicago statue, 2014 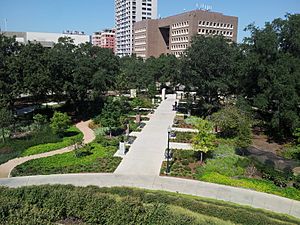 The bust in Houston is installed in Hermann Park's McGovern Centennial Gardens (pictured in 2015).

All content from Kiddle encyclopedia articles (including the article images and facts) can be freely used under Attribution-ShareAlike license, unless stated otherwise. Cite this article:
Benito Juárez (Martinez) Facts for Kids. Kiddle Encyclopedia.