The Bentinck Street elms were planted around 1904 and later pollarded.

English elms were favoured/ planted between c. 1880 and c. 1920 - corresponding with the date of Bentinck Street's elms. Elms are a defining tree of the c. – c. 1900 ('Federation') era in Bathurst and a number of inland Australian and NSW country towns of this period (e.g.: Ballarat, Bendigo, Albury, Orange, Wagga Wagga). They were a favoured species of street tree in the second Municipal Street Tree Period in NSW (c. 1880-1920). Key Bathurst parks such as Machattie Park, and "competing" parks such as Robertson and Cook Parks, Orange all feature magnificent, mature English elms.

It is significant that downtown Bathurst is characterised by mature elms - as is its chief historical rival, downtown Goulburn. These are the two major early inland cities of NSW.

In 1984 the Bathurst Action Committee to Secure Unified Planning (BACSUP) contacted the Heritage Council in regard to a proposed 7 lane roadway traffice enhancement scheme that would lead to the removal of 20 elm trees along Bentick Street.

After discussions and meetings with Bathurst Council and consideration of the trees streetscape and historic significance a section 136 Order was signed and placed on 16 trees on 22 August 1994.

In late 1984 three separate section 60 applications were subsequently received. One application was to remove all 16 trees, the second to undercut the trees to a clearance of 5.3 metres and the third to trim the trees. After consideration the Heritage Council resolved to approve the removal of trees on the western side of Bentinck street, approve undercutting to a maximum height of 4.8 metres above the road and approve the application to trim the trees.

At its meeting of 6 December 1984 the Heritage Council resolved that it considered it necessary to ensure the trees' future to recommend to the Minister that a Permanent Conservation Order be placed on the 16 elm trees.

An exemption under section 57(2) of the Heritage Actwas approved in for periodic regravelling, emergency and routine work to water mains and electrical installations and routine pruning.

A Permanent Conservation Order was placed on 16 August 1985. The trees were transferred to the State Heritage Register on 2 April 1999 (Heritage Office files). 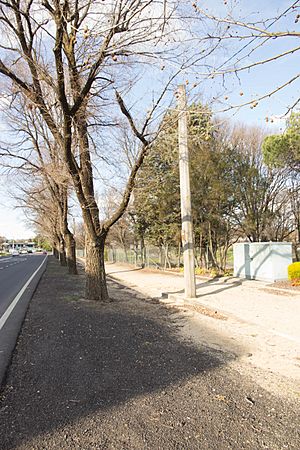 The Bentinck Street English elms (Ulmus procera) form a healthy, evenly spaced avenue of trees of uniform growth to a height of approximately 9-12 metres. The trees are an English elm (Ulmus procera) and are often used as an ornamental tree for parks and large gardens and it is deciduous. There are 13 on the eastern side and 3 on the western side of Bentinck Street between Howick and Durham Streets (Heritage Office files).

The mature Bentinck Street English elms were planted about 1900. They make a significant contribution to the historic townscape of Bathurst.

All content from Kiddle encyclopedia articles (including the article images and facts) can be freely used under Attribution-ShareAlike license, unless stated otherwise. Cite this article:
Bentinck Street Elm Trees Facts for Kids. Kiddle Encyclopedia.