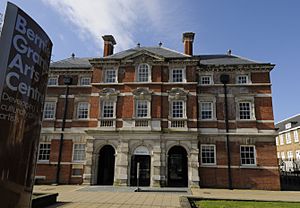 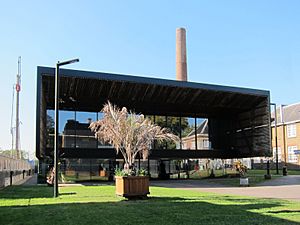 The Bernie Grant Arts Centre (BGAC) is a £15 million purpose-built multi-arts centre, which includes a 274-seat auditorium, studio/rehearsal space, café/bar, enterprise centre and open spaces. It is located next to the Town Hall in Tottenham, North London. The centre was designed by David Adjaye and opened in September 2007.

According to its proclaimed aims:“The BGAC aspires to be a nationally and internationally recognised centre for the development of diverse cultural and creative practitioners, which has a demonstrably positive impact on the quality of life of local communities. The vision of the centre as an organisation dedicated to making a substantial contribution to the social and economic regeneration of Tottenham is a key objective of the organisation.”

It is named in honour of Bernie Grant, MP, who represented the area. It was an initiative started before his death in 2000, through which he aspired to create "a unique showcase for international multicultural talent". Visiting the BGAC on 11 August 2010, Culture minister Ed Vaizey MP said: "What I have seen today is fantastic. It is a working example of how a community space can bring opportunities to the many people who want to work in creative industries."

All content from Kiddle encyclopedia articles (including the article images and facts) can be freely used under Attribution-ShareAlike license, unless stated otherwise. Cite this article:
Bernie Grant Arts Centre Facts for Kids. Kiddle Encyclopedia.