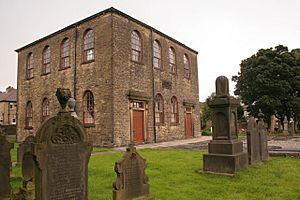 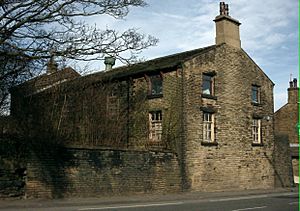 The Bethel Chapel (1853) is an independent Methodist chapel in Halifax Road, Shelf, Yorkshire.

Records compiled in 2007 show that 4,938 people have been buried in the graveyard there since it opened in 1852, including three Elizabeth Taylors and one Isaac Newton.

Notable burials include Joseph Jagger, the man who in 1881 "broke the bank at Monte Carlo" and Edward Hartley, an early socialist politician who retired to Shelf.

The cemetery includes at least three war graves from the First World War, including Second Lieutenant A. E. Lord of the Yorkshire Regiment who won the Military Medal and died in 1918.

All content from Kiddle encyclopedia articles (including the article images and facts) can be freely used under Attribution-ShareAlike license, unless stated otherwise. Cite this article:
Bethel Chapel, Shelf Facts for Kids. Kiddle Encyclopedia.