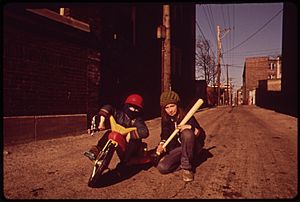 A big wheel is a brand of low-riding tricycles, made mostly of plastic, with a larger front wheel. Introduced by Louis Marx and Company in 1969 and manufactured in Girard, Pennsylvania, the big wheel was a very popular toy in the 1970s in the United States, partly because of its low cost and partly because consumer groups said it was a safer alternative to the traditional tricycle or bicycle. It was marketed primarily to boys between eight and ten years of age, and thus significantly bigger and older users than traditional tricycles. 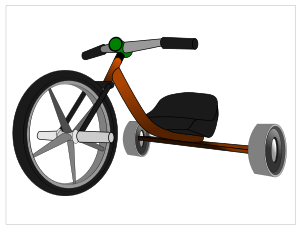 The design was quickly imitated, under a variety of brand names. Although "Big Wheel" was a registered trademark, it was frequently used as a generic name for any toy whose design resembled that of Marx. Following the bankruptcy and liquidation of Marx Toys in the early 1980s, the Big Wheel brand name and molds were sold to Empire Plastics, makers of the Power Cycle brand, which was Marx's biggest competitor. 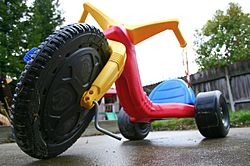 By the late 1990s, few manufacturers were making these toys. Empire filed for bankruptcy in 2001. The Big Wheel brand was reintroduced under new ownership in 2003. The big wheel was inducted into the National Toy Hall of Fame at The Strong in Rochester, New York, in 2009.

Annual races are held for big wheel-style tricycles in some locations. One, the Bring Your Own Big Wheel (BYOBW) race, takes place on Easter Sunday in San Francisco. A big wheel race was hosted by the Tulsa Big Wheel Racers LLC as a fundraiser for the Cancer Sucks cancer research center on June 13, 2009.

All content from Kiddle encyclopedia articles (including the article images and facts) can be freely used under Attribution-ShareAlike license, unless stated otherwise. Cite this article:
Big wheel (tricycle) Facts for Kids. Kiddle Encyclopedia.