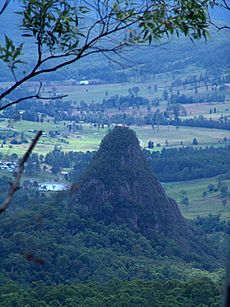 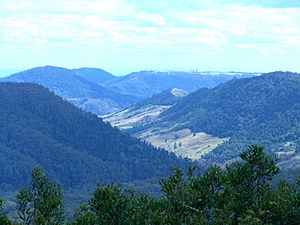 View north of Binna Burra, from the Senses Trail circuit 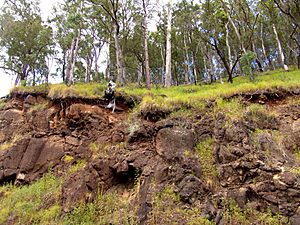 Binna Burra is a parcel of private land and mountain lodge surrounded by Lamington National Park in Queensland, Australia. It is also the name of a locality in the same area within the Scenic Rim Region. The lodge lies in the north-eastern corner of the Lamington Plateau in the McPherson Range, 75 km south of Brisbane. It is marketed as an ecolodge and was one of the first nature based resorts to be established in Australia. In 2000, the resort was the first commercial accommodation provider to be awarded Green Globe Certification in Australia. The lodge and other aspects of the built environment at Binna Burra are listed on the Queensland Heritage Register as the Binna Burra Cultural Landscape.

The mountain lodge was founded in 1933. From the outset the company aimed to make ecotourism and environmental protection a significant objective under the guidance of one of its founders Romeo Lahey. Binna Burra remained apart from the nearby national park as the properties around were bought by the Queensland Government on an irregular basis, to extend the size of the park. In 2012, facilities were expanded with the construction of 20 modern new apartments to add to the log cabins already accommodating visitors.

The forests in the area are part of the World Heritage site, Gondwana Rainforests of Australia (formerly Central Eastern Rainforest Reserves). The name, Binna Burra, is an Aboriginal word meaning "where the beech tree grows," referring to a stand of Antarctic Beech (Nothofagus moorei) growing in the nearby rainforest, as shown in the adjacent image.

Access to Binna Burra is from Beechmont, via a mountainous road not suitable for large caravans. In 2001, 108,551 vehicles were recorded by counters as entering Binna Burra. More recently this figure has increased to around 250,000 visitors per year.

Extending away from the clearing a number of short and long walks, many of which were designed and built by Romeo Lahey during the Great Depression. All of Lahey's track's have a gradient not greater than 10%. Lahey had noticed that the local dairy cows never seemed out of breath. After surveying the animals paths he concluded a ratio of 1:10 for a gradient was best. These graded walking tracks lead to the upper Coomera River and numerous smaller creeks, Coomera Gorge, Coomera Falls amongst many other waterfalls. To the east is the Ship Stern Range and Dave's Creek circuit and the all-day hike along the Coomera Track.

Binna Burra was featured on the third season of The Mole. An assignment involved the contestants having to travel up to Binna Burra, whilst on the way answering questions that would help them in succeeding in the assignment.

All content from Kiddle encyclopedia articles (including the article images and facts) can be freely used under Attribution-ShareAlike license, unless stated otherwise. Cite this article:
Binna Burra Facts for Kids. Kiddle Encyclopedia.